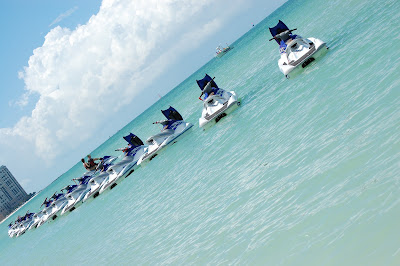 for those of you who don't know i am a water girl. i love the beach, i love to be on a boat and i love to go fast on the water. i asked my man if he would like to do the waverunner tour that would take us on a tour of the 10,000 islands and he said yes.....i was so pumped! friday was our day to do whatever we wanted before the recognition dinner that night, so we took full advantage of that. we made our reservations for the tour, we gathered our stuff and headed out to the beach. when we arrived the "beach guys" told us that the tour was at 1pm, we should go get a drink at the hotel and come back. we thought that was odd, since we were told the tour was at 12:30. so we listened and went up to the pool for awhile. as we were walking back down to the beach, our tour was walking to the jetskis and took off without us! the "beach guys" had mistakenly thought we were part of the group tour for an organizition and told us to come back on saturday........we informed them that it was our last day and we could not. so our laid back beach guy said that he would catch us up to the tour. so we strapped on our lifejackets, heaved ourselves on the jetskis and toooooooooooooooook off!!!


the tour guide stopped us at the mommy/baby dolphins again, but they stayed away from us as we circled around to get a better view of them. but just as we were hitting the water way to the island we found a pod of 5 dolphins that were making their ways through the channels. they headed straight towards us!!! i wanted to yell at the guide and ask if i could jump in with them, but figured that they were wild dophins, probably best not to disturb their environment even more. but they literally swam just beyond my finger tips. if i could have leaned a little further i could have touched one. they were amazing. they had no fear of us, they just headed right towards our jetski. that was probably one of the best moments of the trip.

after basking in the glow of "almost" touching a dolphin we took off again and this time we hit it full speed ahead!!! thad was having fun, topping off at 38 miles an hour!!! i on the other hand was holding on for dear life as he crossed over wakes and hit all the waves! it is so much easier to be in control of the craft, but it was fun. i made sure that if i was gonna fly off, so was he. we eventually caught up with the other group, but not before we got to see some real manatees swimming!!!! huge, huge animals. they lumbered through the water and were pretty darn amazing to see.

we were actually a little sad to catch up to the group because once we did, they was nothing exciting to see or do. we just rode around on the jetskis. i think that our guide that messed up really made up for that fact and made sure we got an excellent ride at the beginning of our time. in all we missed about 20 min of ride time, but overall we got the better experience by far!