I have been meaning to post this since december, but today I found a group on facebook about growing up girl in the 70's and could not resist! When I was a kid, this was my very first perfume! I loved it. I felt so grown up and mature wearing my very own perfume. of course if i was anything like my daughter is now, I sprayed that sucker all over and probably gave everyone around me a headache. lol. I have not thought about it for probably 20 some years, until Syd's bday party when one of her little friends pulled it out of her bag. I was dying. I could not believe that they still make this stuff. I of course had to take a picture of it and thought to myself what a great blog post it would be. he he. so here you go, my post about love's baby soft!! 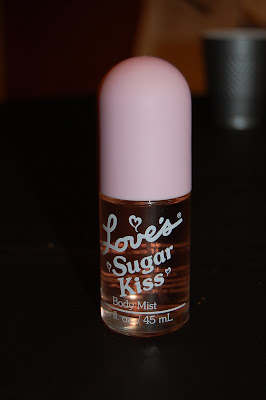 
You had that Fisher Price Doctor's Kit with a stethoscope that actually worked.
You owned a bicycle with a banana seat and a plastic basket with flowers on it.
You learned to skate with actual skates (not roller blades) that had metal wheels.
You thought Gopher from Love Boat was cute (admit it!)
You had nightmares after watching Fantasy Island .
You had either a 'bowl cut' or 'pixie', not to mention the 'Dorothy Hamill'. People sometimes thought you were a boy.
You had rubber boots for rainy days and Moon boots for snowy days. YEAH!
You owned a 'Slip-n-Slide', on which you injured yourself on a sprinkler head more than once. You owned 'Klick-Klacks' and smacked yourself in the face more than once!
Your Holly Hobbie sleeping bag was your most prized possession.
You wore a poncho, gauchos, and knickers.
You begged Santa for the electronic game, Simon.
You had the Donnie and Marie dolls with those pink and purple satiny shredded outfits, or the sunshine family
You spent hours in your backyard on your metal swing set with the trapeze. The swing set tipped over at least once.
You had homemade ribbon barrettes in every imaginable color. (Oh yeah!)
You had a pair of Doctor Scholl's sandals (the ones with hard sole & the buckle). You also had a pair of salt-water sandals.
You wanted to be Laura Ingalls Wilder really bad; you wore that Little House on the Prairie-inspired plaid, ruffle shirt with the high neck in at least one school picture; and you despised Nellie Oleson!
You wanted your first kiss to be at a roller rink!
PONG! ('video tennis' ) was the most remarkable futuristic game you've ever heard of !
Your hairstyle was described as having 'wings' or 'feathers' and you kept it 'pretty' with the comb you kept in your back pocket. When you walked, the 'wings' flapped up and down, looked like you were gonna 'take off' .
You know who Strawberry Shortcake is, as well as her friends, Blueberry Muffin and Huckleberry Pie.
You carried a Muppets lunch box to school and it was metal, not plastic. With the thermos inside some were glass inside and broke the first time you dropped them.
You and your girlfriends would fight over which of the Dukes of Hazzard was your boyfriend. YOU had Star Wars action figures, too!
It was a big event in your household each year when the 'Wizard of Oz' would come on TV. Your mom would break out the popcorn and sleeping bags!
You often asked your Magic-8 ball the question: 'Who will I marry. Shaun Cassidy, Leif Garrett, or David Cassidy?'
You completely wore out your Grease, Saturday Night Fever, and Fame soundtrack record album.
You tried to do lots of arts and crafts, like yarn and Popsicle-stick God's eyes, decoupage, or those weird potholders made on a plastic loom.
You made Shrinky-Dinks and put iron-on kittens on your t-shirts!
You used to tape record songs off the radio by holding your portable tape player up to the speaker. Y
ou had subscriptions to Dynamite and Tiger Beat.
You learned everything you needed to know about girl issues from Judy Blume books. (Are you there God, It's me, Margaret.)
You thought Olivia Newton John's song 'Physical' was about aerobics. (?? its not??)
You wore friendship pins on your tennis shoes, or shoelaces with heart or rainbowdesigns.
You wanted to be a Solid Gold dancer.
You drowned yourself in Love's Baby Soft - which was the first 'real' perfume you ever owned.
You glopped your lips in Strawberry Roll-on lip-gloss till it almost dripped off.

So funny! Were we all exactly the same in the '70's? Oh how I loved Shaun Cassidy!!

Sorry, I didn't mean to leave it anonymous! That was me.

i bought that perfume for bailey for christmas just because it brought back so many memories of when i was a little girl!! it was my first too!! aaahhhh the memeories