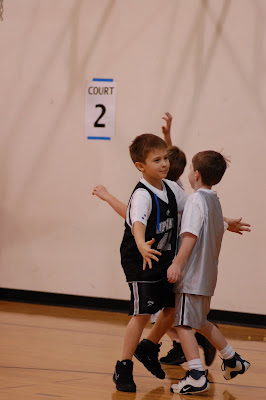 (always has a smile)
this is was it, the day noah had been waiting for.........his day to shine on the basketball court. if you have read my blog for awhile you know that my adorable little guy is not a natural born athlete. he is my jokester. my happy go lucky little man. but we keep signing him up for sports, knowing that sooner or later it will click and he will (hopefully) love sports.

last weeks game was a nightmare for noah, maybe more for me as i was struggling not to be embarrased. i usually get super frustrated with him and i am more nervous at his games, because i want him to get it. but one person made an innocent comment to me the week prior and it stuck in my brain and i was upset that i was embarrased....because no matter what he is my son and i should support him and love him for who he is, not what i want him to become.

but back to last week's game.........he never gets his hands on the ball, so he just kind of runs around out there and guards his man when he thinks about it. to be fair, he has not really shown the team that he can handle the ball, because he usually shys away from the ball and frankly i am not quite sure he even knew what to do when he got the ball! but last week he was super discouraged and sad that his teammates never pass the ball to him, so we had to have a little talk about why that was and how he could show his teammates that he really could play. it literally broke my heart, i was so sad for him.

so this week, the coach decided it was time for the lesser ball players to get some time with the ball and make sure that people were actually passing. it was noah's first quarter out and the moment came....his friend karston (who always tries to give him the ball, bless his heart) passed the ball to noah! i could tell by the look on noah's face that he was unsure, but suddenly it kicked in and he actually dribbled it down the court............and he took a shot!!!!! from that moment on he actually played real basketball!!! he still avoided getting rebounds, but he was passed to several more times and took about 4 shots in all. none went into the hoop, but he did it and i know that he found his confidence for the first time this season.

it is all about confidence with noah. he does not really want to try unless he knows that he can do it. he does not want to be embarrased in front of his friends, but yet he does not get respect from them out on the court because he does not try. it is a vicious cycle. but he was super pumped yesterday and he said that it was the best game ever!!!

Way to Go NOAH!!!! It sounds like a wonderful game and hopefully a turning point for his confidence! :) I look forward to hearing about all of his baskets made the rest of the season!