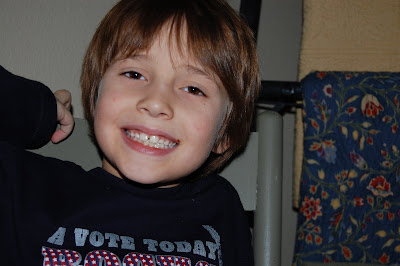 my little guy has decided that he wants a cat, his very own cat, to keep and love and take care of. so in an effort to show that he is ready for one this week he has decided that he is dishwasher boy. he takes everyone's plates from the table, turns on the water and rinses each plate thoroughly (a little too much actually) and then places them in the dishwasher! wow! he is so proud of himself.

it all started a while ago when both of the kids asked for another cat and their dad refused immediately. we already have one cat and a dog and that is about enough for my man to handle. but last sunday he went to a friends house to play and the boys had each gotten a new hamster.....that did it, he was hooked back on the i want my own pet. so we came up with a plan to ask his dad. of course their will be no rodents in this house. ever. so it has to be another cat.

you start by asking for a hamster. then you move to a ferret(eeeewwww) then you end with a kitty cat. simple right? so began noah's quest. his purpose in life. to show his dad that he is responsible enough to take care of a cat. who could deny their child that request.

apparently his dad would.

Ever condider a hermit crab? Slightly less maintainance than a cat but not as gross as a rodent (I'm with ya there!).