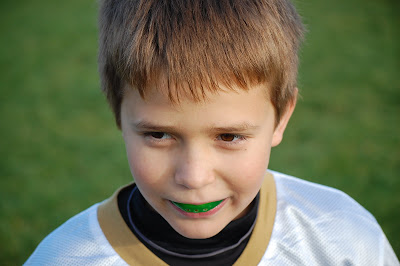 since i had fallen a little behind on my blogging in september i did not have a chance to share our football experience this year! noah is playing boys and girls club flag football again this year and he is so pumped about it! at this point he really loves the social aspect of it more than the actual game, but as the season has progressed so have his skills and his willingness to learn.

it has been an interesting season. one wraught with macho men and their warped views of the game, but noah does not know about that. he just wants to get on the field and play. he is only in second grade and has many years to spend in practice and getting better.......let him enjoy it now!

this year i thought i would try a bribe in order to get his keister running out on the field and since he was only allowed to play defense, i told him for that every flag he pulled i would buy him a candy bar. first game out = two candy bars purchased. not too bad!

he is now allowed to play offense, but not allowed to "touch" the ball. he has been hiking the ball to the quaterback and then running to get open for the ball. since he will never get the ball thrown to him (partly his own fault because he is still not comfortable catching) i have nothing to really bribe him with. but he is loving it so much and this week he went out and practiced with his dad and caught every ball that was thrown at him!

"the more i practice, the luckier i get" Jerry Barber