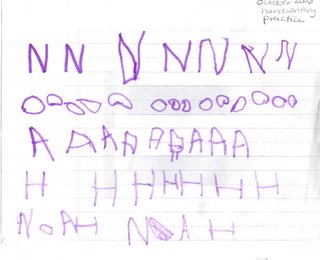 So here it is monday afternoon and you know what, I actually sat down with Noah today and worked on writing his name....he surprised the heck out of me and wrote most of his letters really good. The "n" is the hardest, but he didn't do half bad. I also used some flash cards to work with him on his alphabet recognition and sounds. He rocked on that one, because he loves to play his Leapster phonics game. It only took 15 minutes, but it felt so good to be productive with him. He loved it because he received a cookie and a video when it was over....I think I am on to something here. I decided that on the days he does not have preschool he will have to play on starfall.com {http://www.starfall.com} and work on writing his letters for a half and hour. I would really like him to be successful in his kindergarten education and if I work with him now, he should be ready and enjoy it next year. Let's see how far I actually get with it, but for now, I have one day down.