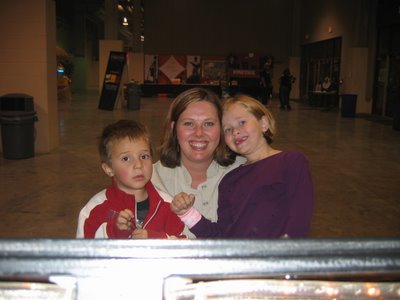 well, not really. but my kids do now. my friend called and asked if the kids and i wanted to go to the david crowder/third day concert for free....thad was already taking the high school kids, so this way we could tag along and take the kids to their first true rock concert, the wiggles don't count. they had a great time dancing to the music and clapping their hands. at one point noah was on his air guitar and sydnie had her hips shaking with her hands up in the air....how adorable is that. we got a lot of laughs and "how cute" from the families around us. it was a super fun night. i love introducing the kids to good music and they loved the lights and all the high schoolers jumping up and down. I did miss being able to enjoy the music without someone crawling all over me or hanging from the railing, while i watch with concern. Good times last night, can't wait to do it again. Rock on.............

Posted by Rochelle at 7:50 AM 0 comments 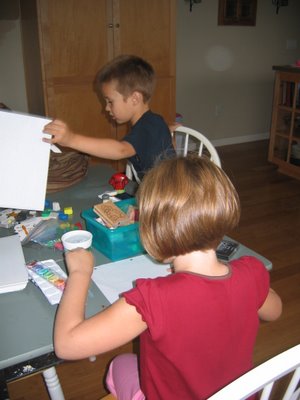 Posted by Rochelle at 4:24 PM 0 comments 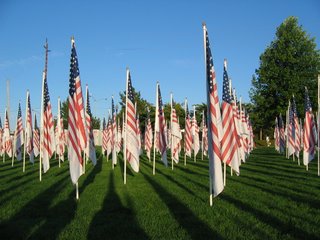 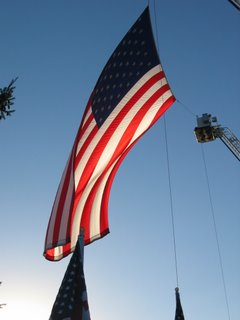 My hometown was fortunate enough to host a 9/11 memoriam called the "Healing Fields." A breathtaking display of over 3,000 flags that move in the breeze, as you recall the images and emotions of that day your mind recalls it all over again. will never be forgotten. You cannot help but be moved as the tears come to the surface...you slowly let them fall, not bothering to wipe them away. for there is no shame in tears for the fallen, all around you people are grasping for some meaning, some sense of closure. Just as Pearl Harbor is for several generations, so this will be our reminder that freedom does come at a price. As you walk away from the wreckage of your emotions you start to feel a little peace, a little healing. Knowing that God has a plan for all of us, He cares for us. Even when something like 9/11 does not make sense to us, He knows.

This evening I walked with my son, who was not even born when this tragedy occured. I tried to show him what honor and respect are. That we should always remember that firemen and policemen and so many others willingly gave their lives that day to save others. I just pray that in the years to come the next generations will be able to know what honor and respect are all about.

to find out more about this organization go here: http://www.healingfield.org/index.php

Posted by Rochelle at 8:44 PM 0 comments

We Will Never Forget

As the nation went to work on the east coast and woke up on the west, a terrible event in America's history was unfolding. Two hijacked planes crashed into New York Cities World Trade Towers and decimated Life, Liberty and our sense of Security. Within an hour each building collapsed, taking with it the lives of many of our firefighters, policemen and civilians. The Pentagon was next on the list and was also attacked by a hijacked airplane. Many American servicemen and women lost their lives while working at their desks. No one could have foretold this tragedy, but from it we see our nation rising to the occasion. Flags which are normally only seen in July, are now flown with Dignity, Pride and Rememberance.


I woke up early that morning and turned on the news. I could not quite comprehend what I was seeing. I went into the bathroom to tell Thad that the WTC was on fire, but seconds later realized that this was more than a passing issue. I viewed the Pentagon with smoke billowing out and ran into let Thad know that "we were being attacked". How true those words ended up. We both watched in horror as the first tower collapsed. As Thad went to work, I was mesmarized by the coverage. We called each other continually throughout the day to share our feelings and what news we heard. The week took its toll on us emotionally as we realized we were at WAR, but not a war like any we knew.

Posted by Rochelle at 4:00 PM 0 comments