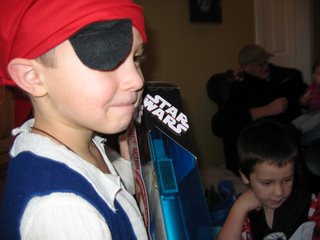 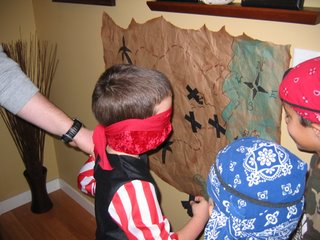 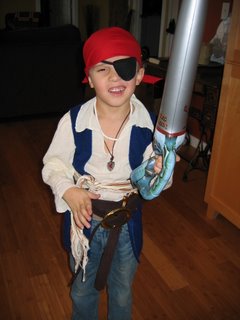 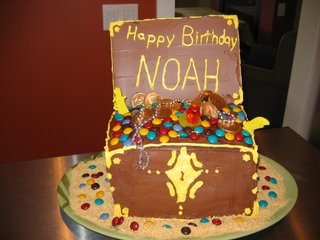 and throwing a party for eleven 5 year olds, can sure take you away from your computer. Noah had his Pirate party yesterday and boy was it loud and a shipload full of fun. Each of the boys was given an eye patch and bandana to wear when they came in and then sent off to play until everyone arrived. Then we played pin the X on the map, which I am sure some of the boys could see thru, because we had about 5 that hit it dead on. Then we went on a treasure hunt. Now it is the middle of winter and yesterday was cold, so we had to move the treasure hunt indoors. The funniest part of the whole day was when one little boy who we will call "mad dog wiggins" shouted out "holy ship!" and then everytime a present he liked was opened he would shout it again. Laughed so hard I could barely stop. Almost forgot that Santa came by yesterday as well and handed out candy canes to all the pirates on hand. (that just took a little call to the Keizer Fire Dept to make sure they stopped by during the party). Of course no pirate party would be complete without a treasure chest full of loot, each kid received a loot bag full of gold coins, an eraser sword, pop ring, skull straw, pirate tatoos and more candy. Noah had a great time, but once those presents were opened, he did not even want to eat cake. He was super excited about his star wars transformers and his spring action light saber. Alas, the pirate went to sleep with his new toys in hand. Good times, mom and dad are very tired, house is in chaos, but would do it all again. Sleep well little pirate.